“The judges wish to commend the rapid turnaround of five short pieces, supported by the Audio Content Fund, which had dramas played out on community radio stations, written by and mainly starring people with disabilities. Dealing with isolation in lockdown and finding ways to make connections, these were performed with vivacity and a lightness of touch. Re-invention doesn’t have to be the sole preserve of the big players at the BBC.” 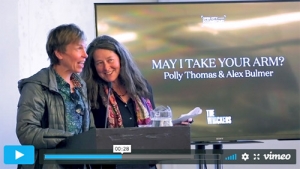 2017   ARIA Award • shortlisted : best factual programme • Between the Ears : Sounds Like She